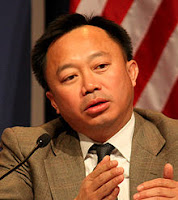 Posted by The Record on April 16, 2003 in News
BY KATIE BIBER
Just ten years ago, then-3L Viet Dinh walked the halls of Harvard Law School as a student. He attended class in Austin and studied in Langdell. He was a Class Marshal who graduated magna cum laude. And last week he returned here as Assistant Attorney General for the Office of Legal Policy, his simple “Class of 1993” nametag belying his remarkable life story and meteoric Washington career.
Dinh plays a key role in developing administration policy on everything from judicial nominations to anti-terrorism initiatives. Operating at what Attorney General Ashcroft calls a “gold-medal level,” Dinh has led the Office of Legal Policy to an expanded role in the Justice Department and Bush administration. He does it all with a vigorous energy, bounding through the halls of the Justice Department and discussing his ideas at breakneck speed. “Call me Viet,” he insists to acquaintances of all stripes, including the many students he met here during his reunion. Some think that with a bit more gray hair, the 34-year-old former Georgetown Law professor might someday be the first Asian-American Supreme Court Justice.
Such speculation illustrates how Dinh’s life is the essence of the American Dream, distilled and compressed into three decades. He fled Vietnam with his mother and siblings when he was only a ten-year-old child. His father, a fugitive political prisoner, stayed behind. For nearly two weeks the family was crammed in a leaky 15-foot boat with 80 other refugees and little food and water. On the twelfth day of their journey they managed to find land, only to be greeted by gunfire from patrol boats. Vietnamese refugees were not welcome in Malaysia. They swam ashore, but Dinh’s mother knew they would be made to leave the next day. She returned to the port at night. To make certain no Malaysian official could order her children back to sea, she gouged holes in the wooden boat with an ax. The family’s last link to Vietnam disappeared into the South China Sea.
After living at a refugee camp, Dinh’s family finally made it to the United States. They picked strawberries to make a living and sent money back home. In 1983, the young Dinh was reunited with his father, and the family settled in Orange County. Dinh studied hard and eventually won a scholarship to Harvard.
Stories like this one transcend petty politics. Republicans and Democrats alike are moved by the journey that brought a family to the United States and elevated its youngest son to Washington prominence. Dinh says his life experiences provided him with a “special sensitivity to what it means to be an American.” The rest of us have something to learn from his story as well. We’re damn lucky to live in this country. There is always room for improvement, of course. But our lofty political bantering ought to start from the premise that the United States has done a lot of things right. Hard work still counts for something, and success is available to anyone willing to reach high and grab it.
Dinh’s parents, both now American citizens, understand this. They instilled in their son a strong work ethic and a fierce love for their new country. They sat near him at his Senate confirmation hearing in 2001 and watched the parade of admiring testimony. When it was his turn to speak, Dinh paid tribute to his mother’s courage and the “incredible lengths which my parents, like so many other people, have gone to in order to find that promise of freedom and opportunity.” He was confirmed 96-1, with Hillary Clinton as the lone dissenter. His high school in Orange County placed him on their Wall of Fame.
Brilliant students like Viet Dinh pass through Harvard Law School every year, to be sure. They sit among us today, waiting for the moment that they too will be tapped to lead. But there is something particularly remarkable about Dinh’s life story, and how his trip on a leaky boat more than twenty years ago led him to a stately office on Pennsylvania Avenue. He is testament to the promise of America and is an example of what happens when brainpower meets determination. May he and others like him continue to remind us that anything is possible.
++++++++++++
Tài liệu tham khảo:
1. Katie Biber, Viet Dinh: An American Story, The Harvard Law Record, 16/4/2003
http://hlrecord.org/2003/04/ viet-dinh-an-american-story/
2. Eric Lichtblau, At Home in War on Terror, The Los Angeles Times. 19/9/2002
http://articles.latimes.com/ 2002/sep/18/nation/na-viet18/2